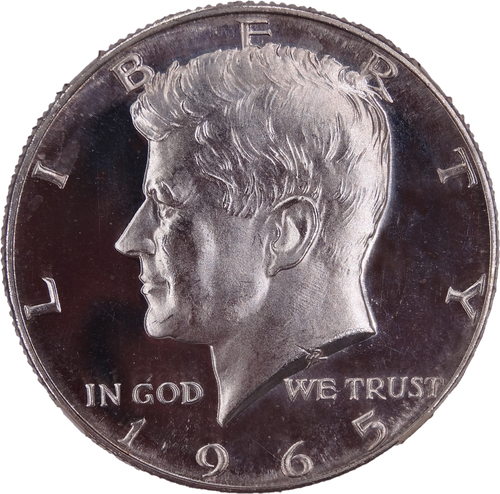 A striking 1965 Kennedy half dollar special mint strike. In 1965, amidst the change of material from 90% silver to a 40% silver planchet and a nationwide coin shortage, the mint moved away from proof coinage - a change that would last through 1967.  Instead, the mint issued special mint strikes from polished dies and un-polished planchets, which provided an intermediate finish between proof and standard issue strikes.  This exceptional example - graded MS66 Ultra Cameo by NGC - displays proof-like fields and frosty cameo relief. The utra cameo highlights proved to be exceptionally uncommon in the 1965 SMS issue.  Of the nearly 20,000 1965 SMS Kennedy half dollars graded by NGC, only 112 in total have achieved the Ultra Cameo designation.  Only about sixty examples grade finer in Ultra Cameo.  This is a stunning, and extremely uncommon example of the issue.