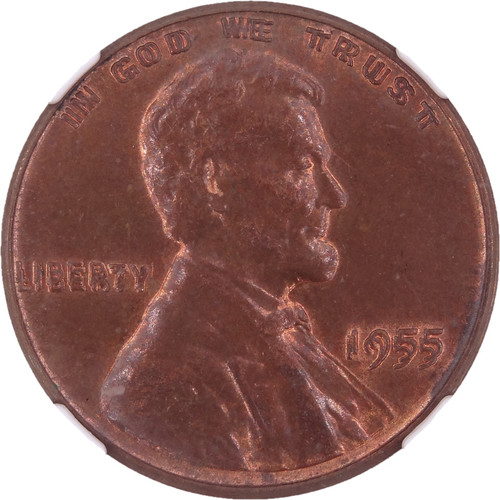 This is an outstanding red-brown example of the remarkable 1955 double die obverse (DDO) Lincoln cent.  A light russet patina covers most of the high spots, however brilliant copper-red details uniformly adorn the fields, especially near the rim, lettering, date and recessed areas, making the doubling all the more dramatic.  This example is graded MS62 RB by NGC and bears a CAC endorsement as an outstanding example of the grade - one of only ten CAC endorsements for the 1955 Lincoln double die cent in MS62 RB! This is a breathtaking and rare red-brown, mint state example of the coveted 1955 DDO variety.

The 1955 DDO Lincoln cent is by far the most famous and dramatic double die cent variety.  The doubling of the obverse text and date are dramatic and easily identifiable with the naked eye.  The doubling occurred when the working die was rotated slightly during the hubbing process, resulting in the transfer of two strong impressions of the incuse image on the die, offset by approximately three degrees of rotation.  It is estimated that fewer than 50,000 of these dramatic coins were struck and something less than 25,000 were released to circulation.  Most of the approximately 9,000 graded 1955 DDO examples are brown (with an average grade of AU58), with less than 10% of all graded examples at both NGC and PCGS rated red-brown.  Red, mint state examples are extremely rare - accounting for only about 4% of all examples.