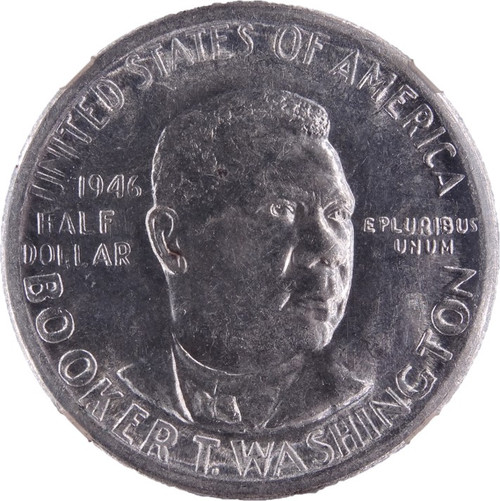 A beautiful, lustrous 1946-S Booker T. Washington commemorative half dollar from the SAn Francisco mint.  This strike was the first year of issue - Graded MS65 by NGC.  Legislation was passed on August 7th, 1946 to honor Booker T. Washington in an effort to raise funds for the Birthplace Memorial Commission which was looking to purchase and maintain his birthplace in Franklin County, Virginia. African-American artist Isaac Scott Hathaway offered his designs for free to the Commission of Fine Arts and was awarded the commission for the coin design. Booker T. Washington's bust in profile adorns the obverse, while the reverse is adorned with the text "From slave cabin to Hall of fame".  Below the text is a rendition of a small cabin depicting the modest circumstances into which he was born.  Above the text is a depiction of the Hall of Fame of Great Americans - an outdoor sculpture collonade located on the grounds of Bronx Community College in the Bronx, New York City (originally New York University) - into which he was inducted on November 1, 1945.  Booker T. Washington was a champion of education and black enterprise, founding Tuskeegee University and leading the institution from 1881 until his death in 1915.