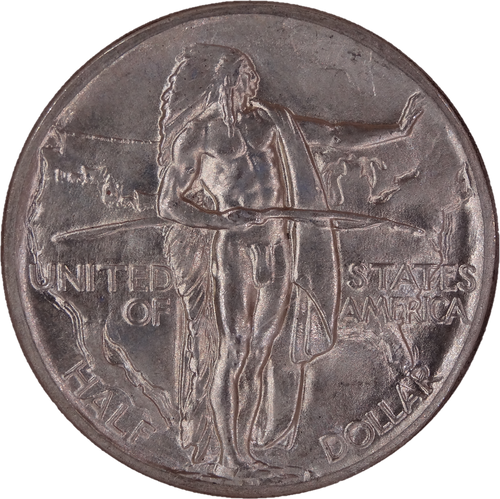 This is an exceptional example of the 1938 Oregon Trail commemorative half dollar, graded MS66 by NGC.  This example has beautiful mint luster and great eye appeal.  The unblemished surfaces and excellent preservation of the original surfaces have earned this coin a CAC endorsement as an outstanding example of the grade - Less than 15% of this issue graded MS66 received a CAC endorsement.

The Oregon Trail commemoratve half dollar celebrated the westward expansion of the United States and the pioneers that headed west across the nearly 2,200 mile path from Independence, Missouri to the Willamette Valley of Oregon in the middle part of the nineteenth century.  It's use diminished as transcontinental railroads gradually supplanted wagon travel with greater speed and significantly less risk.  The Oregon Trail issue represented one of the more iconic sets of images in the commemorative series, with a Native America on the face, arm outstretched against a backdrop of the United States, and the opposite face which displayed a pioneer on foot leading a team of oxen pulling a covered wagon into the setting sun.