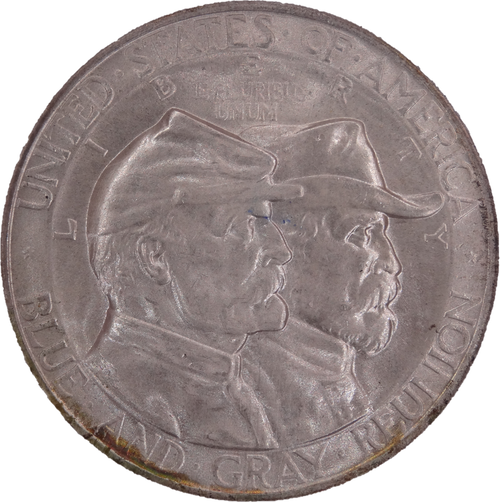 This is an outstanding example of the 1936 Gettysburg commemorative half dollar.  This example is graded well above average; earning a grade of MS66 from PCGS and a CAC sticker as an endorsement of an exceptional example of the grade. Few grade finer.  The coin has beautiful clarity of silver color and a band of copper toning adorns the upper edge of the reverse. The coin was issued to commemorate, and raise funds for the last great reunion of the Confererate and Union forces that fought at the pivotal Battle of Gettysburg in which Major General George Meade's Union Army of the Potomac met Confederate General Robert E. Lee's Army of Northern Virginia during opening days of July 1863 in the American civil war. The battle was the bloodiest of the war and is seen as a turning point in stopping the Confederate advance on the North. The 1938 reunion marked the 75th anniversary of the battle and brought together Confererate and Union veterans, all in their 80's or 90's, as a symbol of peace and reconciliation.