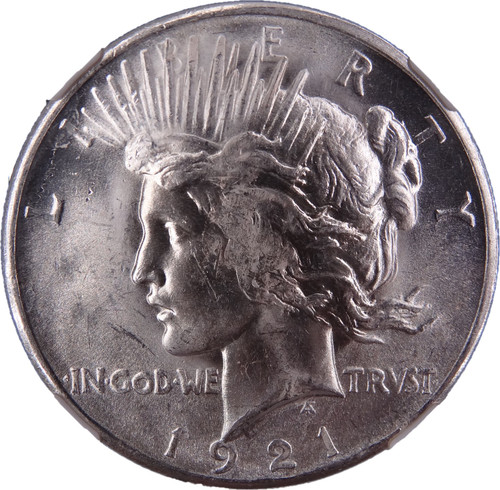 A gleaming, mint state 1921 Peace Dollar from the Philadelphia mint.  This example is graded MS62 by NGC and has earned a CAC endorsement as an outstanding example of the grade.  The Peace Dollar was minted to mark the formal declaration of peace following the First World War.  While WWI hostilities ended with the November 11, 1918 Armistace Agreement, a formal peace was not ratified by Congress until July of 1921, and it wasn't formally declared by President Harding until November 14, 1921.  With the formal announcement in mid-November, it left little time to design and mint the Peace Dollars.  Consequently, the only Peace Dollars to be minted in 1921 were a scant 1,006,473 coins struck in the final days of December 1921.  Unique to the 1921 Peace Dollar was the high relief design, which proved difficult to mint and was subsequently re-designed in a standard relief version for the remaining years of production.

Interested in learning more about the making of the first Peace Dollars?  You can find out more at our Blog: