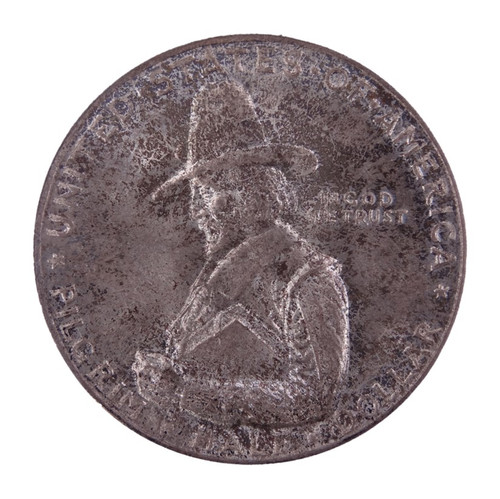 This is a well preserved 1920 Pilgrim commemorative half dollar from the Philadelphia mint, identified by the absence of a date on the obverse (only the 1921 issue Pilgrim coins bear a date of issue).  The coin displays a uniform toning throughout as indication of undisturbed original surfaces.  In the hand, spectacular mint luster radiates through the toning and displays gem brilliance.  The coin is graded MS65 by PCGS.

Designed by Cyrus E. Dallin, the Pilgrim commemorative half dollar was designed to celebrate the 300th anniversary of the landing of the pilgrims at Plymouth, Massachusetts.  Having first reached what is now Provincetown Harbor, Cape Cod in November of 1620, the 102 passengers on board the Mayflower sought a suitable place to establish themselves.  Having located a suitable spot, the Mayflower landed at Plymouth on December 18, 1620.  The first winter in Plymouth was difficult, with half of the colonists dying from disease, starvation and exposure. Their first Governor, John Carver, survived the winter only to perish in the spring of 1621.  William Bradford, whose visage adorns the obverse of the coin, was chosen by the colonists to replace him.  Under Bradford’s stewardship Plymouth Colony continued and eventually took hold as a thriving settlement attracting continued settlement in the New World.