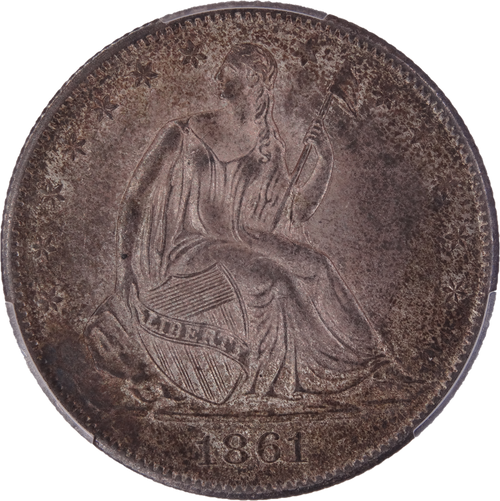 The 1861-O Liberty Seated Half Dollar represents one of the most historically significant issues in US coinage.  The 1861-O half dollar was minted under the auspices of the United States of America at the outset of 1861.  Following the secession of Louisiana, the issue was coined under the authority of the Republic of Louisiana, and finally after Louisiana joined the Confederacy, the issue was minted under the authority of the Confederate States of America (CSA) until closure of the mint in May of 1861.

Well struck and retaining original detail and surfaces, this example of an 1861-O Seated Liberty Half dollar (W-04 die pair) was minted by the Republic of Louisiana in the early months of 1861.  Being the second die pair of the Louisiana issues, this coin was minted just days following the secession of Louisiana from the Union on January 26, 1861 - likely in March of 1861.  This coin was minted by the independent Republic of Louisiana prior to joining the Confederacy on March 21, 1861. Coinage was scarce in the Confederate South, and this well preserved example is conditionally rare.  As of July 2022, PCGS has certified only eight examples of the W-04 die pair, and this is the finest graded example of the W-04 die pair listed by PCGS; The next finest listed is graded AU58. This is an unparalleled example of the Louisiana W-04 issue.