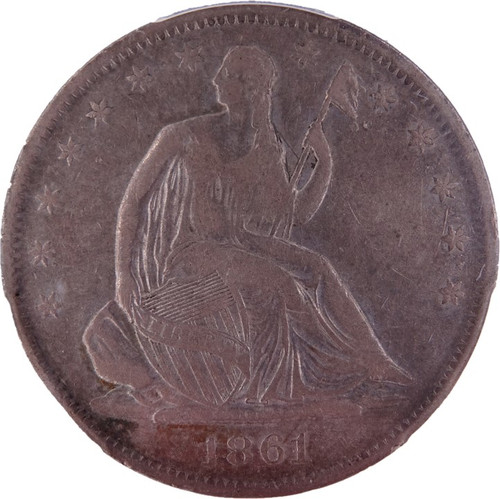 The 1861-O Liberty Seated Half Dollar represents one of the most historically significant issues in US coinage.  The 1861-O half dollar was minted under the auspices of the United States of America at the outset of 1861.  Following the secession of Louisiana on January 26, 1861, the issue was coined under the authority of the Republic of Louisiana, and finally after Louisiana joined the Confederacy, the issue was minted under the authority of the Confederate States of America (CSA) until suspension of coining operations in April of 1861.

With surfaces smoothed through years of circulation in commerce, this example of an 1861-O Seated Liberty Half dollar (W-15 die pair) was minted by the Confederate States of America in the early months of 1861.  Being the last die pair of the CSA issues, this coin was minted in the last days of operation of the New Orleans mint during the Civil War - likely in April 1861.  Louisiana joined the Confederate States of America on March 21, 1861, and the mint closed shortly after in April of 1861.  Coinage was scarce in the Confederate South, and the well-worn surfaces of this historical beauty bear testament to its lengthy circulation in the economy of the Confederacy and later through the economic reconstruction of the South.

This die marriage is known as the "Speared Olive" due to the presence of a die crack that creates the appearance of a line through the upper olive bud held in the talons of the eagle on the reverse - reminiscent of an olive spear in a martini.  It is one of the most colorfully named and easily recognizable of the CSA half dollar die marriages.