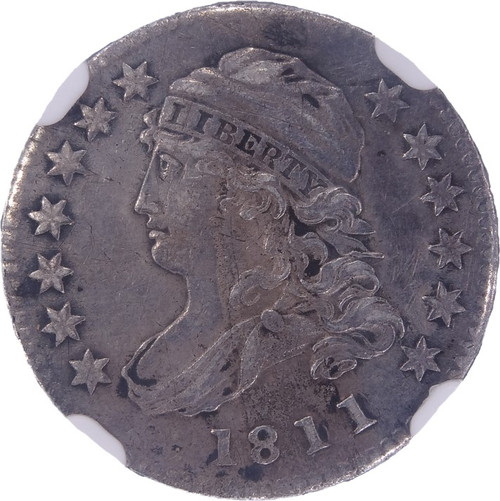 This rare and attractive 1811 Capped Bust dime from the Philadelphia mint shows good surface definition and detail.  This example bears the AU Details designation from NGC, and despite the environmental effects from two centuries in circulation, has managed to retain excellent detail relative to many of its peers.  The only known die pairing for the issue is the JR-1 1811/09 overdate. The die marriage represents an 1809 obverse re-punched with the 1811 date and a remaining 1809 reverse die.  Consequently, all examples show the distinct remnants of the “09” from the original die beneath the 1811 date.  The well used dies began to fail in the advanced die state, with later examples such as this showing significant breakage of the reverse die.  Part of a small initial mintage, this issue has seen significant attrition in the two centuries since it was struck.  Rare in any condition, there are only ~250 graded examples between both NGC and PCGS with most showing considerable circulation wear and grading VF or lower.   This is a stand-out example is exceeded in quality by few available pieces.